Blogcast: A Reading of The Declaration of the Alliance of Guardians and Children of Mother Earth

Religica - Blogcast: A Reading of The Declaration of the Alliance of Guardians and Children of Mother Earth 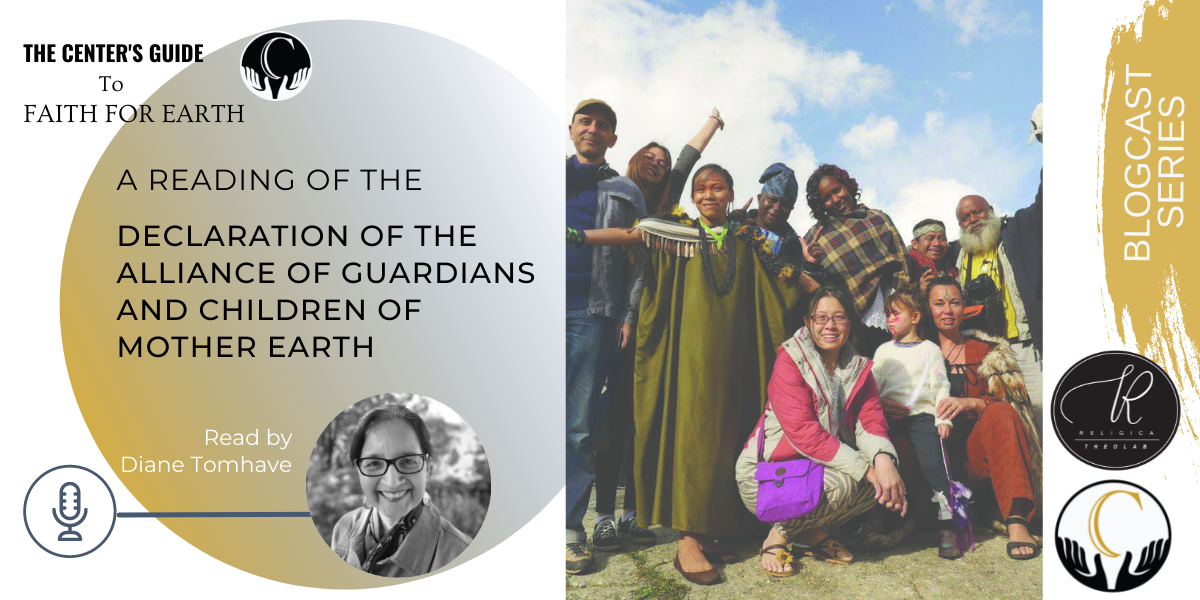 Listen to this  Blogcast  on Soundcloud

Diane Tomhave reads a section of The Declaration of Alliance of the Guardians and Children of Mother Earth, a global call to the States and humanity for the preservation of life on the planet and future generations.

This is the first blogcast in our Faith for Earth blogcast series where we’ll be highlighting the commitments and calls for action faith traditions have made around caring for the Earth.

We, Guardians and Children of Mother Earth,

Indigenous Peoples and allied partners, held our Second Assembly, and our prophecies, our wisdom, our insights have allowed us to see that life on Mother Earth is in danger and is coming to a time of great transformation. Indigenous Peoples have continually taken care of Mother Earth and humanity. We wish that this can continue with the support of the people of the world. The Indigenous prophecies place in us the responsibility to tell the world that we must live in peace with each other and Mother Earth to ensure harmony with her natural laws and with the Creation. We are calling for effective solutions that recognize the rights of Indigenous Peoples. We are calling to the world leaders, the States, the United Nations, and civil society to start thinking about phasing out those juridical systems inherited from the colonial times and replacing them with others that take up Nature, Mother Earth as an entity which has fundamental rights. We must evolve towards a paradigm based on Indigenous thought and philosophy, which grants equal rights to Nature and which honors the interrelationships between all life forms and the preservation of Mother Earth.