Your Voice at the Center

Welcome to Your Voice at the Center

The Center for Ecumenical and Interreligious Engagement (CEIE) at Seattle University invites writers to share their reflections with us in essay form.  We include these essays – often drawn from CEIE’s  Religica Theolab or Interfaith Observer – in the monthly CEIE newsletter and also share them here.  If you would like to contribute please contact us at thecenter@seattleu.edu.  Thank you from the CEIE Team.

In 2022, the National Council of Churches’ bilateral interfaith dialogues continued to address critically important issues.  The experience of this interaction goes back to our member churches and finds its way into other respective interactions and work.  With the active participation of 25 member and non-member communions at the interreligious relations and collaboration convening table, the exposure for the churches to these other communities and the relevant issues through the dialogues is quite broad; likewise with such wide church participation, the exposure to our interfaith partners of ecumenical realities is quite extensive, and the input from the various churches informs work of the whole.  These intersections reflect the conciliar principles, methodologies and aims of the organization.

The National Buddhist-Christian Dialogue, co-convened by the NCC with The Guibord Center, Claremont School of Theology, University of the West, and Fo Guang Shan Hsi Lai Temple, met remotely in May, and covered the following agenda topics: the historical and religious dimensions to the war in Ukraine; the lessons learned from the Japanese experience of WWII internment; and the continuing impact of Covid-19 in our communities.  In October, the dialogue resumed in-person gatherings and met in Los Angeles, and it covered the following agenda topics: the Lotus Sutra and peace, and the Christian scriptures and justice; internal distinctions in our respective traditions; and therefore implications for solidarity in the face of racial discrimination and hate crimes directed at Asian communities in the US.  The group also visited the Japanese American National Museum for a private tour (as the museum was otherwise closed to the general public for the day) of an exhibit on “Sutra and Bible – Faith and the Japanese American WWII Incarceration” (https://www.janm.org/exhibits/sutra-and-bible). 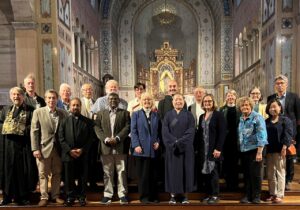 The National Hindu-Christian Dialogue, co-convened by the NCC with The Guibord Center and Vedanta Society of Southern California, met remotely in May, with an agenda focused on historical and religious dimensions to the war in Ukraine and humanitarian concerns facing the world as a result of the conflict.  In October, the dialogue resumed its in-person sessions with a gathering in Los Angeles.  Topics included the meaning of respective holidays that were being celebrated during that timeframe, namely Diwali and worship of the Divine Mother, and All Saints Day, with particular focus on the various theological understandings of Mary; the interrelatedness of growing friendship, deepening theological understanding, interfaith dialogue, and collaboration; and how these converge when addressing the social complexities in the US and India in terms of racism, ethnic supremacy, and religious nationalism.  The group also had a private viewing of the film on the sanctity of creation, especially animals, called Anima, which was produced by The Guibord Center and is winning awards in international film festivals (https://theguibordcenter.org/initiatives/animals-and-creation/anima-movie/). 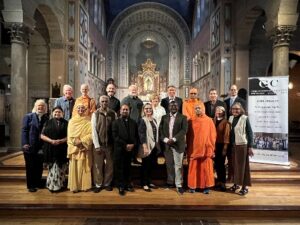 The NCC is fortunate to have the participation of Seattle University’s Center for Ecumenical and Interreligious Engagement at these two dialogue tables, and we appreciate the vision and leadership that the Center and its director, Rev. Dr. Michael Trice, bring to our conversations.

Click on the image above to visit Rev. Dr. Rick Rouse’s profile at Seattle University.

Leaders of major Lutheran institutions in the Pacific Northwest gathered for a Lutheran Summit hosted by Seattle University’s Center for Ecumenical and Interreligious Engagement.  Center Director and Spehar-Halligan Professor, Rev. Dr. Michael Trice and Advisory Council member Rev. Dr. Rick Rouse co-facilitated a stimulating day of conversation, discovery, and envisioning.  Participants shared their plans and aspirations for the spiritual formation and development of church leaders in the Pacific Northwest.

The gathering was significant because it brought together bishops, laypeople, clergy, educators, and community service providers to explore their common mission and to consider the potential for collaboration and cooperation.  A guiding inquiry of the Summit was:  How and in what specific ways will we leverage our mutual gifts to best impact the Lutheran community in Washington State and the Pacific Northwest?  Summit attendees discussed such topics as the unique culture of spirituality in the Northwest, the complex issues of trauma and anxiety taking its toll on pastors and congregations, and the future of university and seminary cooperation in theological formation.

Click on the image above to visit Dr. Marc Cohen’s profile at Seattle University.

The first five books of the Hebrew Bible, Genesis through Deuteronomy, are divided into 54 “portions.” One or two are read each week on a schedule followed (uniformly) by Jewish communities around the world. The cycle began again with the first few chapters of Genesis the week of October 16th, then this past week we read the chapter that include the story of the Tower of Babel.

On the conventional interpretation, a group of un-named persons build (what we would call) a skyscraper, to displace God. And then an angry, threatened God responds: God “confounds their speech” and—because they can no longer communicate—the city-builders are forced to abandon their skyscraper. The name ‘bavel’ is derived from the Hebrew word for “confound.” As such, the story can serve as a myth explaining how human communities came to speak different languages.

But something very different is at stake, something we can see if we pay close attention to the text.

11:1: Everyone on earth had the same language and the same words.

11:2: And as they migrated from the east, they came upon a valley in the land of Shinar and settled there.

11:4: And they said, “Come, let us build a city, and a tower with its top in the sky, to make a name for ourselves; else we shall be scattered all over the world.”

One key to this text is the last part of verse 4, “else we will be scattered all over the world.”

11:7: [God says], “let us, then, go down and confound their speech there, so they shall not understand one another’s speech.”

11:8: Thus the Lord scattered them from there over the face of the whole earth; and they stopped building the city.”

Note that the tower is not mentioned in verse 8, connected with the starting point mentioned a moment ago: interpretations of this story focused on the tower emphasize the wrong point and misunderstand the text. And note that—also in verse 8—God is not punishing the city-builders by “scatter[ing] them over the face of the whole earth.” God is, instead, restoring (or enforcing) God’s own vision, humans should fill the earth.

But what is at stake in the commandment to fill the earth, why is building this city—the opposite of filling the earth—a problem?

Theologian Rabbi Shai Held’s interpretation focuses on this question, and his answer follows the nineteenth century, eastern-European rabbi known as the Netziv. (“Netziv” is an acronym for that rabbi’s name, Naftali Tzvi Yehuda Berlin.)

The Netziv focuses on the end of verse 1, “Everyone on earth had the same language and the same words.”

And the city-builders enforced this conformity in thought, this is implied in their worry in verse 4, “else we be scattered all over the world.” The Netziv again: “they [the city-builders] feared that since not all human thoughts are alike, if some would leave they might adopt different thoughts. And so they saw to it that no one left their enclave.” The tower was to serve as a watchtower.

God’s intervention, God’s confounding the city-builders’ language, therefore creates space for different thoughts. Rabbi Held: “Our story is not about the loss of some primordial human unity lost in the mists of time, but on the contrary, about an active attempt to undo a divine plan for diversity.”

First, the passages in Genesis chapter 10—before the story of the city and the tower—consist of a long genealogy. Those passages list Noah’s sons’ many descendants, all given by name. And the passage immediately after the story of the tower repeats the list of Shem’s descendants, extending the genealogy it to Abraham. The Hebrew the word ‘shem’ actually means “name,” in case we missed the point that names matter.

But—in contrast—no individuals appear in the story of the tower. There are no names.

Rabbi Held sees a connection here between the conformity in thought imposed by the city-builders and the lack of names: enforcing conformity destroys our individuality and that—according to Held—is “an assault on God”! “Jewish theology affirms that each and every human being is created in the image of God, and that our uniqueness and individuality are a large part of what God treasures about us.” So the story amounts to “God’s affirmation of the blessings of cultural, linguistic, and geographical diversity.”

Second, Rabbi Held doesn’t mention this, but the Netziv connects the story of the tower with another verse.

Later in Genesis, Isaac blesses his son Jacob saying, “May El Shaddai [another name for God used in the Hebrew Bible] bless you, make you fertile and numerous, so that you become an assembly of peoples” (28:3)—peoples, plural.

According to the Netziv, a people—singular—follows one custom.

So the mention of peoples in Genesis 28:3—plural—means that Jacob is blessed as the father of a Jewish community in which different groups hold different customs, religious practices, and interpretations!

The Netziv might not take this further step, but can we extend God’s blessings of cultural, linguistic, and geographical diversity to include beliefs and practices across religious communities?

Can this text serve as the starting point for inter-religious dialogue and exchange, as a way of participating in this blessing?

From the other direction, by resisting this sort of engagement across religious traditions, by not engaging with others as equals, do we confound God’s blessing of diversity?

Sources: Material taken from the chapter “People have names,” in Rabbi Shai Held’s wonderful book The Heart of Torah (Philadelphia: The Jewish Publication Society, 2017). Text of the Netziv’s Haamek Davar accessed at https://www.sefaria.org/Haamek_Davar_on_Genesis?tab=contents

The author and Michael Trice dedicate this essay to the memory of Fr. Peter Ely, z’’l.