Enlightened Leadership in an Authoritarian World 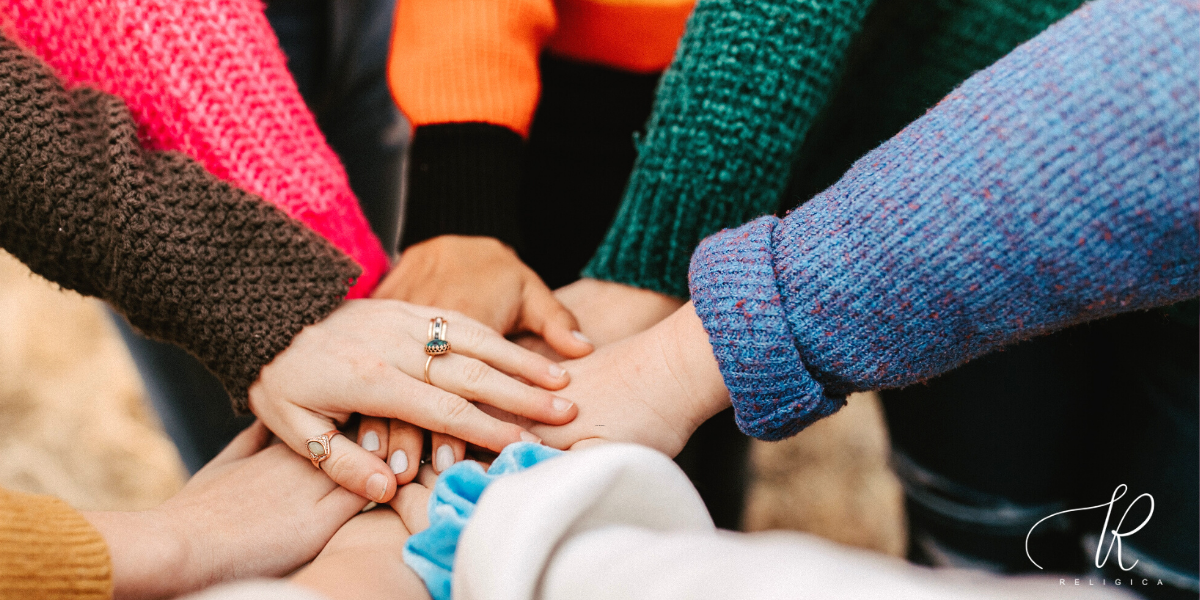 In August of 1963, in Zimbabwe, as I held tightly onto my mother’s hand, we walked down the street of a small African farming town, whilst our cursing white neighbors spat on her if they could not avoid her by walking on the other side of the street.

Why were they doing this?

My mother was a dance teacher certified by the Royal Ballet School in London. She was deemed guilty of teaching all the communities’ children ballet, tap, and jazz – to a few Africans, Indians, and most Europeans. Even though she characterized her corps de ballet as starting off with two left feet, with the money raised from the annual dance eisteddfods, my mother, Pearl van Zyl, had the first swimming pool in the country built for an Indian high school. For that betrayal of exclusive white privilege, the townspeople spat on her, as her dignified stoic presence transcended their vitriol.

Her quiet courage resisting the conformity of prejudice and hate was my first lesson in the meaning of true leadership.

What concepts do we have of what true leadership is?

It seems to us that there are two aspects to leadership, both needed for balance and effectiveness: the outer pragmatic vision, and the inner spiritual/moral growth required to allow the angels of our better nature to temper and guide the outer work. 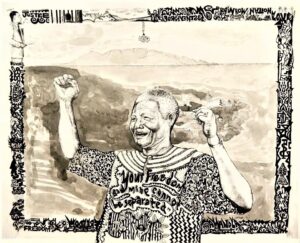 “The Mandela Story” – My freedom and yours cannot be separated. 24” x 32” Ink on paper by Andre van Zijl

The visionary leader Nelson Mandela heroically led the oppressed masses in South Africa out of bondage from the monolithic state-sponsored racism of apartheid. He was a self-subdued leader who through 27 years of solitary confinement learned that he had to forgive his enemies or he would forever remain a prisoner of hate.

What Mandela’s journey tells us is that transcendence of circumstance is empowering and transforming when guided by a vision of unity within diversity. It teaches us that as we learn to heal and integrate the fractures and schisms of our own inner lives, we become more able to authentically discover a more inclusive vision of ourselves in relationship to the whole community of life’s belonging. Belonging to the whole human family, belonging to the totality of the web-of-life, rather than only belonging to a narrow sense of localized identity.

A leader can be anyone who wishes to serve the common good, leading horizontally rather than hierarchically.

It seems that the most effective and influential leaders are those who serve, unify, and empower others. An effective leader facilitates their unfoldment, seeking the benefit of the collective rather than serving their own narrow personal interests. This is perhaps better known as servant leadership.

True leadership comes out of a culture of inclusion, out of radical acceptance of the “other,” out of nurturance rather than the more prevalent hierarchical culture of patriarchal privilege and authoritarianism. Nurturance does not mean abdicating response-abilities or denying the effective pragmatism of the servant-leader; these qualities are enhanced within a nurturing leader.

As the co-founders and co-directors of All Paths Divinity School, an online interspiritual seminary, one of our courses in our Interfaith-Interspiritual ordination and M.Div program is on “Enlightened Leadership.” We as our students resist exploring the idea of leadership for themselves until they let go of their concepts of authoritarian leadership. They then discover with a great sense of personal empowerment that it is through exemplifying collaborative leadership, as servant-leaders, that they are already being a true leader, often in quiet yet meaningful ways.

They discover within their training the ability to listen deeply from the awakened heart and to distinguish between what Buddhists see as the inevitability of pain and the optionality of suffering. This discernment creates the global empathy required from a true leader.

In a recent discussion, we had with some friends at the John Cobb Institute, some of the reasons behind the fatal political and social divide that faces the country today were clarified. From the open and relational evangelical theologian Christian theologian John Sanders, in his book Embracing Prodigals: Overcoming Authoritative Religion by Embodying Jesus’ Nurturing Grace, we have a very clear distinction between these two divergent worldviews:

“Two social science models, Nurturant and Authoritative, explain this divide. Values are at the heart of our disagreements.”

Studies have shown that 42% of the population prefers a cultural narrative without the nuances of complexity, one that is communicated in simple unambiguous language in terms of black and white moral contrasts, rather than gradations of grey, seeing only either-or rather than both-and, with an angry Patriarchal God at the helm who demands obedience to rigid rules for “salvation” to be possible.

A visionary leader is capable of guiding a divided nation away from the battle lines of separation and conflict towards a more universal understanding of unity. Such leadership is unequivocally demonstrated through the lives of the heroes of the struggle for racial and economic justice, both past and present and to come.

Is the world we live in merely a reflection of ourselves? Or can we see the world as it is, itself imbued and saturated by the sacred, beyond the purview of our preferences or druthers? Can we see this larger more inclusive vision of a world for all? Especially now, within the raw reality of inexcusable abuses of public office and the manipulations of orthodoxy/status quo hiding its nefarious gospel of fear and hate behind saccharine images of assumed goodwill towards others, fake acceptance of diversity, opaquely promoting “economic fairness,” while hardly hiding the iron fist of law, and order?

Is it truly two America’s we live in? Is it truly justice for the chosen elite and law for the invisible dying protesting masses? Can we by non-violently asserting our individual voices as a chorus of unbreakable unity assert a different truer reality for all?

As visionary leaders, why not shout out our unity and inextinguishable hope for the positive change that we are an undeniable and essential part of? With our voices being heard and our lives being consequential we might just create the future of positive possibility we so long for.

MAY WE BE LOUD, BE KIND, & UNSTOPPABLY HOPEFUL!!!

This is being a true leader, whatever we choose to do in the world.

1. Do you think leadership can be more effective as a collaborative process rather than a top-down management process? Why or why not? Have you experienced this kind of leadership before?

2. What are some examples of enlightened leadership you have witnessed in your own life context and experience? (Not big names, but everyday people you know.) 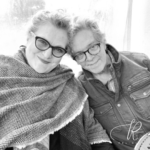 Rev. Debrah Friedland-van Zyl is Co-founder and Co-director of All Paths Divinity School, an online interfaith seminary. Programs include Interfaith Ordination, Master of Divinity/Theology degrees, Spiritual Counseling & Spiritual Development. She is co-chair of the Southern CA Committee for a Parliament of the World’s Religions (SCCPWR). For nearly 40 years, she has designed and facilitated many interfaith and spiritual events, workshops, and retreats, both in the US and internationally. In 2013, 2015, and 2017, she has been Co-Producer, Co-Chair, and event manager of the SCCPWR Seeds of Peace events in Los Angeles and co-creator and co-producer of Conversations on Pluralism Series. She is L.A.-based and South African born.