Blogcast: A Reading of the Buddhist Declaration on Nature

Religica - Blogcast: A Reading of the Buddhist Declaration on Nature 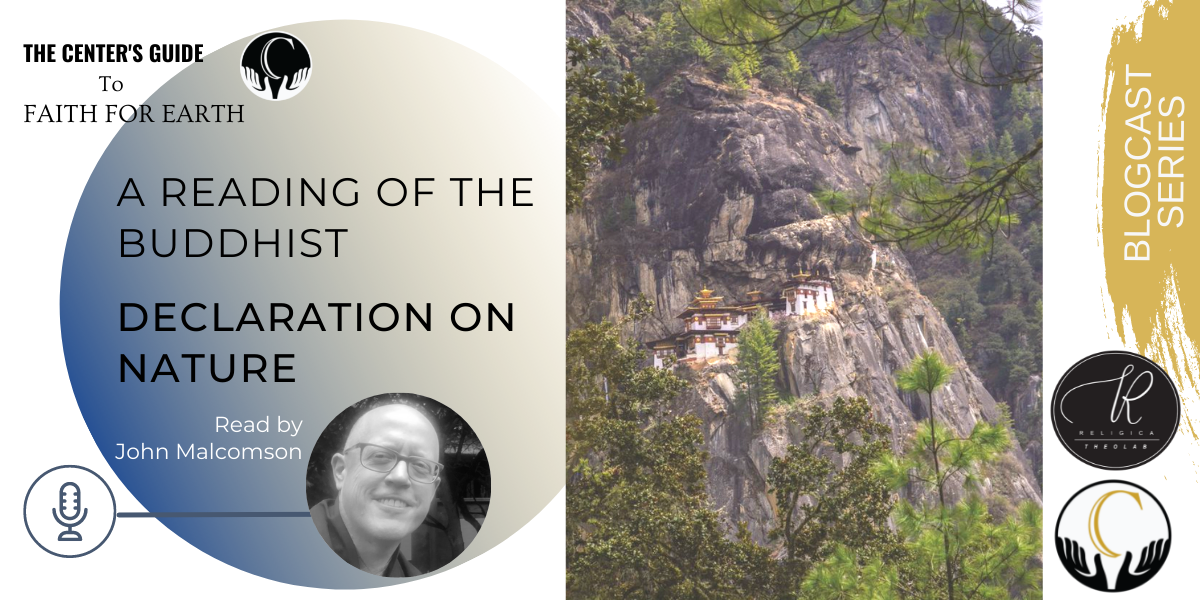 Listen to this Blogcast on Soundcloud

John Malcomson reads The Buddhist Declaration on Nature, originally written in 1986 by the Venerable Lungrug Nomgayal, who was the Abbot at Gyuto Tantric University.

This is the 11th blogcast in our Faith for Earth blogcast series where we’ll be highlighting the commitments and calls for action faith traditions have made around caring for the Earth.

The Buddhist Declaration on Nature

In the words of the Buddha Himself: “Because the cause was there, the consequences followed; because the cause is there, the effects will follow.” These few words present the interrelationship between cause (karma) and its effects. It goes a step further and shows that happiness and suffering do not simply come about by chance or irrelevant causes. There is a natural relationship between a cause and its resulting consequences in the physical world. In the life of sentient beings, too, including animals, there is a similar relationship of positive causes bringing about happiness and negative actions causing negative consequences. Therefore, a human undertaking motivated by a healthy and positive attitude constitutes one of the most important causes of happiness, while undertakings generated through ignorance and negative attitude bring about suffering and misery. And this positive human attitude is, in the final analysis, rooted in a genuine and unselfish compassion and loving kindness that seeks to bring about light and happiness for all sentient beings. Hence Buddhism is a religion of love, understanding, and compassion and is committed to the ideal of nonviolence. As such, it also attaches great importance to wildlife and the protection of the environment on which every being in this world depends for survival.

The simple underlying reason why beings other than humans need to be taken into account is that, like human beings, they too are sensitive to happiness and suffering…many have held up usefulness to human beings as the sole criterion for the evaluation of an animal’s life. Upon closer examination, one discovers that this mode of evaluation of another’s life and right to existence has also been largely responsible for human indifference, as well as cruelty to animals, not to speak of violence in today’s world…We should therefore be wary of justifying the right of any species to survive solely on the basis of its usefulness to human beings.

We regard our survival as an undeniable right. As coinhabitants of this planet, other species, too, have the right of survival…let us share the conviction that conservation of the environment, the restoration of the imbalance caused by our negligence in the past, be implemented with courage and determination.

This text is originally from the Buddhist Declaration on Nature, written by the Venerable Lungrug Nomgayal, Abbot, Gyuto Tantric University, Assisi in 1986.